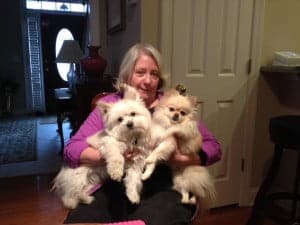 We would be lost without all of the activity provided by our Alex and Abbey. They are so much fun and keep us constantly entertained playing with each other. We are delighted we adopted them.  Thanks to the folks at Homeless Pets Foundation for bringing us together.    -Ron and Carolyn

George got a new mama! And she’s a repeat HPF adopter so he gets a look-a-like sister out of the bargain too!. Congratulations and thank you for adopting!

Lila is homeless no more!

Adoption update: Cliff and his canine brother are already BFF’s

Dolly found herself a family to love!