Cher has found her way home! Cher became homeless months ago when her owner passed away. She was so loyal she had to be carried away from her departed owner’s side. Her reward for all that was to be left at animal control.

We took her in and now the Sharp family has come to her final rescue. Six-year-old Cher won’t have to worry about being left behind again! The Sharps wanted to rescue an older dog and Cher’s sad face caught their eye.

She’s now called Shakti and proudly sports a fancy new leash and collar which we admired when she was brought in for a spa day by the Sharps! THANK YOU for giving Shakti something to live for again!

A woman who was out searching for her own missing cat, happened upon Boss, and took him home with her.  She brought him to the vet for a check up and to get his vaccines, because she intended on adding him to her family.  Unfortunately the resident cats did not take kindly to a new…

Junior came our way when his owner dumped him and his “brother” Buford from their car then sped off.  The dogs held no grudges so we tried not to too. Junior believes when one door closes (even if you’ve just been tossed out it) another one opens. He’s right since this happy lady, Lora, opened…

We rescued Camille in February from an animal control facility. She’d just had puppies. We saw the worker there grab a metal rabies pole and drag Camille out by the neck. Ugh! We were so sad to see this sweet little mama treated that way. Camille sat on our volunteer’s lap, traumatized on the way… 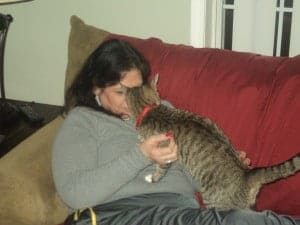 As the Holiday season approached, HPF asked if anyone was willing to foster a cat to free up space and ease the burden on the volunteers. Having been at the Adoption Center numerous times, I had become somewhat attached to Lynn. We agreed to foster her through the Holidays but we failed miserably. Once home,… 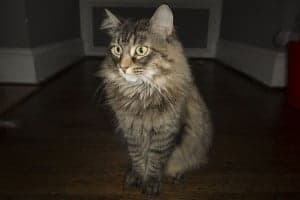 Isis (ex-Ambrosia) is doing great.  She is a wonderful cat.  Very sweet and quite playful.  She spends most of her looking out the windows and napping.  She’s very animated when chasing her favorite toy (a good old-fashioned string) and is very vocal when she’s ready to play.  She’s funny in that she follows me around…