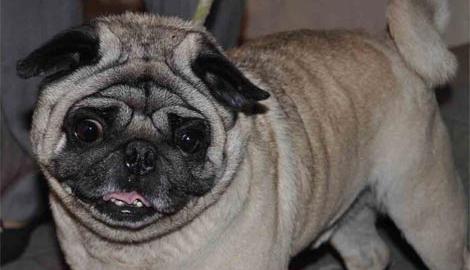 While driving to work one day on Wednesday, October, 2010, a Good Samaritan, Erik, passed an apparently dead dog laying in the median of a busy Atlanta, GA highway. When he took one last look at the poor dog in her rear-view mirror, he saw the dog raise its head. The dog was still alive! Erik turned around and drove back to rescue the dog, and rushed him over to Town and Country Veterinary Clinic. Dr. Good evaluated the dog, a Pug, who was barely conscious, emaciated, dehydrated, matted with burrs and infested with ticks, and had likely been on his own for weeks. Because of his dislocated pelvis and front leg, major head swelling, and numerous scrapes and bruises, the dog couldn’t stand or walk. He would have suffered and died in the hot sun that day if not for his rescuers.

Within two days, Brody had begun to recover and could sit up. Erik and his wife offered to foster the dog, now named Brody, until he could find a home, and the Homeless Pet Foundation covered the medical costs for treating Brody. He has since been adopted! Brody is a very lucky dog!

A very excited woman came in to meet Hamilton and Yale.  She had intended on only adopting one kitten, but once she found out how much they loved each other, she couldn’t leave one behind.  She couldn’t wait to get them home to spoil them with love and toys, but she stopped for a moment…

Icy got a warm welcome from this couple who decided to make room for one more in their home! Congratulations to the entire family and thank you for adopting!

Congratulations to Galaga and Megaman, the first two of Allie’s 12 babies to get adopted! Enjoy your new lives sweeties! Thank you to these families for adopting!

Toffee is the first dog for this young lady and her husband. They just moved here from Pennsylvania so can explore our state with their new furry friend. Toffee gets two cat siblings our of the bargain too.

Ryder rode out of the shelter with his new family. Have a happy life! Thank you for adopting!

This is the way you get a dog for Christmas – bring the whole family to your local shelter on Christmas Eve and ADOPT! Shoelace went home with this family the day before Christmas for a 2-week trial adoption. We just learned he’s not coming back! Shoelace got the best gift of all, a new…