Halle celebrated Mother’s Day with her brand new mom yesterday! She not only got a great new mother, but one who’s a veterinarian too. And look at her cute new human brother. Good work Halle! We’ll miss you.

Thank you for adopting! 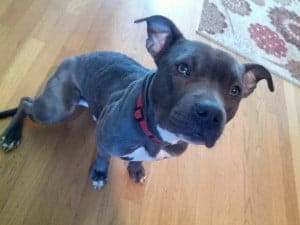 Hello! I recently adopted Blue and wanted to just share that she is doing amazing! She was in Homeless Pets and stole my heart. She plays with my other dogs and loves going for walks. Blue loves the dog park and running around like there is no tomorrow. She has chewed up a remote, three…

Clyde was feeling mighty lonely after his sister Bonnie was adopted last week. He perked up at his Petsmart adoption event debut. Then he got downright giddy when this family picked him as their new furry kid! Congratulations to all!

Susie got lucky and went home with this nice family!

A woman named Brooke looking for a Beagle mix meets one named Brooke! It’s meant to be! Brooke and her new mini-me hope to do some hiking together and bring some fresh energy into the home so her aging dog (the fluffy one) can have a new leash on life! Best wishes Brooke and Brooke!…

Charlie was surrendered by his owner, then adopted within days, but returned because he and the kids weren’t a good match. He was snapped up a couple of days after being returned and we’re hoping the third time is the charm. Looks promising! Congrats and thank you for adopting this little guy!

A woman who was out searching for her own missing cat, happened upon Boss, and took him home with her.  She brought him to the vet for a check up and to get his vaccines, because she intended on adding him to her family.  Unfortunately the resident cats did not take kindly to a new…