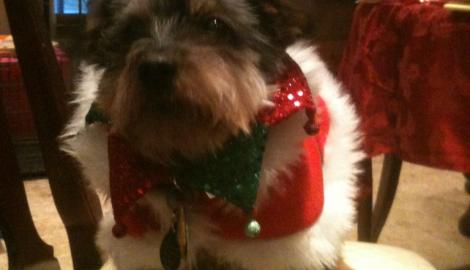 Joy stopped by the clinic on Tuesday evening after the Superbowl to pick up a dog that she had been fostering. However, the dog was adopted just before Joy arrived. In a way it was a good thing because she was told that there was a little dog that needed some special attention. He was in a cage and terrified, shivering and dirty.

Some of the walkers discovered him in a crate outside Town & Country Veterinary Clinic, up to his belly in water, freezing in January just a day or two after the Superbowl. They think he was there for a couple of days before anyone found him, and it had been a cold and rainy weekend. His little voice was still very hoarse, probably the result of trying to get attention for a long time before anyone heard him.

He was named Cody, and he was a survivor. Joy brought him home to foster and knew that as fragile as he was, it would be a long time before we went to adoptions, but that didn’t matter. Joy fell in love with him. It took a LONG time with lots of detangler to get him clean and free up his matted hair. He was so skinny you could feel all his bones. It took about 6 weeks of very intense love and affection from Joy, her friends and neighbors, and her dogs before they could snap him out of his foggy state. He would go limp and look away if you tried to hold him. The dogs tried to engage him in play and he would act like he didn’t even see them. SLOWLY he started to respond to the love and attention he was receiving.

Now he’s a happy playful Senior Citizen at about 10 years of age and going thru his second childhood now. He constantly plays with Joy’s dogs and loves everyone he meets.

Butch was surrendered at Cobb County Animal Control when his owner moved. Already packed with dogs, many of which were pit bulls, they asked us to pull Butch into our program. We did and Butch attended adoption events and impressed everyone with his good looks and behavior but nobody applied for him. Armando, visiting from…

Blue-eyed Marshall met his mom-to-be last Saturday for the first time and when she came back to take him to his forever home he was ecstatic to see her again! Marshall gains a dad and a furry friend named Cassie in the deal too. Thank you for adopting!!! May you have all make many happy…

Dusty came our way recently when his owner passed away and had no back up plan for his pets. At age12 and with severe hair loss due to flea infestation we were prepared to have Dusty with us good long while. Happily, fate intervened. This fantastic family saw Dusty at our mobile adoption event Saturday…

Eight year old Tonto became homeless when his owner moved and could only take one of her dogs. Despite the drastic change in his circumstances, Tonto remained happy and loved everyone he met. Thankfully he didn’t have to wait long before he met his new family. This lady came to our adoption event hoping to…

Used by a breeder until she was considered too old, then tossed out of his vehicle on Highway 400 like trash, Mavis never knew love. Until now. Welcome to the life you always deserved, Mavis! Congratulations on your new home and family. We’re all rooting for you! Thank you so much for adopting Mavis!