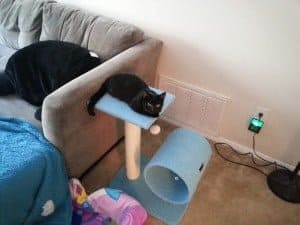 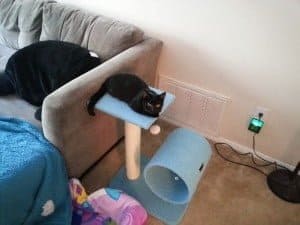 Lena was a very special cat to the volunteers at Homeless Pets Foundation.  She was found as a tiny kitten with part of one of her back legs missing.  We believe that she got herself caught in a trap.  She was very lucky to have survived, but our vet decided that it was best to have her leg amputated at the hip.  She recovered very well after her surgery and you wouldn’t know that she had a missing leg because it doesn’t slow her down at all.

More pictures of Lena in her new home can be seen here: http://imgur.com/a/JdEh0

And just like that we say so long to the last of the Cairn Terrier mix litter AND their mama, Charlotte. The cute gal holding baby Griffin saw him online and it was love at first sight. Mama Charlotte caught the eye of the cute gal on the right at our Petsmart adoption event Sunday…

All adoptions are cause for celebration but a double adoption of bonded pets is reason to celebrate twice as much! Cleo and Blue were surrendered together and now have a new home together. The family who adopted them had recently parted with a pet, were feeling sad and fell for Blue and Cleo. Have a…

Reeses, the Chinese Crested, landed in the perfect spot with a Marietta family who has a pampered Yorkie ready to be his playmate.

Adoption update: Cliff and his canine brother are already BFF’s

Thank goodness not everyone’s pet criteria is “small” and “fluffy”! Brinks is neither but he’s a perfectly precious pup! This 60+ lb. pit bull found himself running out of time and options at a local animal control facility. We stepped in to rescue him and he’s waited the last 7 months for someone to want…