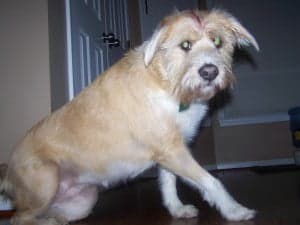 Our Daughter, who worked part time at T&C, adopted a Terrier mix puppy from a litter that was born at the clinic.  At the time our Daughter was living with us and eventually moved to a place of her own. We had gotten attached to Mia and asked that she remain with us. She did and has been with us ever since. She is currently 7.  -Dean and Kaye Nipper

Handsome Fiji now has a new best friend! May you two have many fun adventures together. Thank you for adopting!

This family, who wasn’t intending to adopt, happened to stop by our adoption event as they passed us to run errands. Daphne, (left) caught their eye and they thought she’d make a good playmate for their retriever (right). Daphne was supposed to have already been put back in her kennel downstairs and another dog brought…

Dill loves being around people so scored big when this family adopted him. Both his new parents are retired so will be able to spend lots of time with their new brindle bundle of love! Thank you for adopting!

Three more of Allie’s puppies have adopted parents! Defender (tan), DonkeyKong (with couple) and Tetris are off with their new families and ready to start living the good life. Thank you for adopting!