Hit by a car and taken to be put to sleep, Orion’s defied the odds several times already in his short life of 14 months! We took him in and nursed him back to health, though too much time had passed to mend his hurt back leg.

Nothing extinguishes the light in this little guy’s eyes though, and this family saw that spark and wanted in on it. They welcomed Orion, now called Morgan, into their group and have been having fun ever since! He zips around the house like nobody’s business and loves his new family and furry sis Shiva! Thank you so much for adopting!

Good things come to those who wait politely! Zsa Zsa has been such a polite and patient dog and a pleasure to have around as she waited for a forever family. Her wait is over and we’ll miss her but we’re happy for her and this cute group! Congratulations and thank you for adopting! 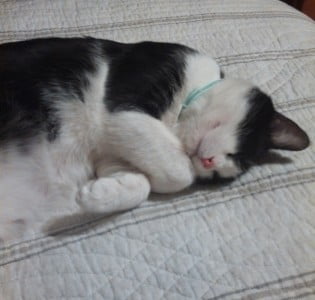 We adopted Sylvester just recently, and as you can see from the picture, he is feeling right at home.  His new best friend is a toddler who asks about him as soon as she wakes up every morning.  They play ball together every day, and he is always happy to help clean up whenever she…

This happy guy sent in an application for Cliff and couldn’t wait for our weekend adoption event, so one of our volunteers met him at Petsmart the next day, so that he could start loving on his new baby.

Oscar went home with this couple and hopes to be spoiled rotten for the rest of his days! Good luck little buddy!

The Shankwiler family stopped by Petsmart when we were there with adoptable dogs and noticed Buford (tan shepherd). They were impressed with his calm demeanor and even though they weren’t in the market for a new dog, thought he might make a good friend for their dog Bella who has some anxiety issues. Bella met…

Used by a breeder until she was considered too old, then tossed out of his vehicle on Highway 400 like trash, Mavis never knew love. Until now. Welcome to the life you always deserved, Mavis! Congratulations on your new home and family. We’re all rooting for you! Thank you so much for adopting Mavis!