Three more of Paisley’s puppies have flown the coop! Clockwise: Panda went to a home where he’ll be best buddies with a Great Dane and hang out with his new dad who’s training to be a police officer.

Mr. Keating bonded with his puppy even before he met or saw him! His daughter-in-law and son donated to us on behalf of Paisley’s litter in Mr. Keating’s honor and won the chance to name one of the… puppies. Mr. Keating wanted the name “Kentucky” but we asked for “P” names so the city of Paducah filled in for the state. Unable to get his sponsored pup off his mind, Paducah, now called Kentucky, belongs to the man who named him!

A mother-daughter duo picked Pepper Jack to be their dog’s new playmate. Their dog was so excited she wouldn’t sit still for their photo.

Happy Tails! Thank you for adopting! (Paisley and 3 of her babies still hope to get adopted soon 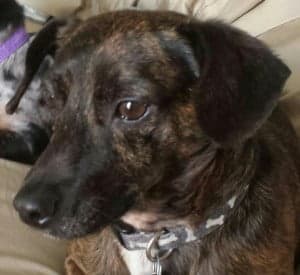 I adopted Felix, who is now named Tigger, from you. He was heartworm positive also. You provided all of his medicines and vet care and he is healthy and very well loved! Thank you for all you do for animals.    -Carolyn Sussman

Big sweetheart Otis found his forever home! He went into a trial adoption 2 weeks ago to see how he did around the family’s cats and he’s apparently passed the test! Congratulations to the new family! Thank you for adopting.

Happiness is a new furry friend. Congratulations and thank you for adopting Carter!

Monkey decided that he was done monkeying around and went home with his new forever family.  Happy purrs sweet boy!

Occasionally we rescue a dog who struggles to be adoption-ready. Their bad prior life rendered them tricky to re-home. Harley was part of a neglect/hoarding case. She’d been kept in poor conditions for so long that when we rescued her, she had no idea how to respond. As a result, some of our volunteers walked…